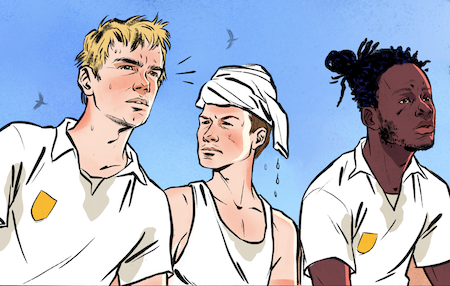 black midi have released new single Chondromalacia Patella from their forthcoming new album, Cavalcade. The video for the track is available to watch now (see above) plus is now on all major streaming services. The third track taken from the new album, the song – about convalescence – is named after a knee injury one of the band sustained from running.

Cavalcade will be released on Friday, May 28, though fans will be able to hear the record in full two days early as the band will be hosting a listening party for the record on May 26. From 2pm (ET)/ 7pm (BST) on the day, Geordie Greep (guitar, primary vocals), Cameron Picton (bass, vocals), and Morgan Simpson (drums) will offer listeners a tour through the new record via YouTube, where the album will stream in its entirety.

Additionally, black midi have announced a Golden Ticket contest to accompany the album’s release. Running until October 28, a Golden Ticket will be placed into one standard, vinyl edition of the LP sold in the UK and one in the US (see competition rules).

Those lucky enough to discover either of the tickets will then be able to claim one of three prizes:

* black midi will be the function band for an event of your choice.

* One day in the studio with black midi for a creative collaboration.

black midi are also pleased to announce further dates for their North American tour. The full tour is below, with tickets for the new dates going on sale on May 21 at 10am local time.